“Have you caught anything?“ 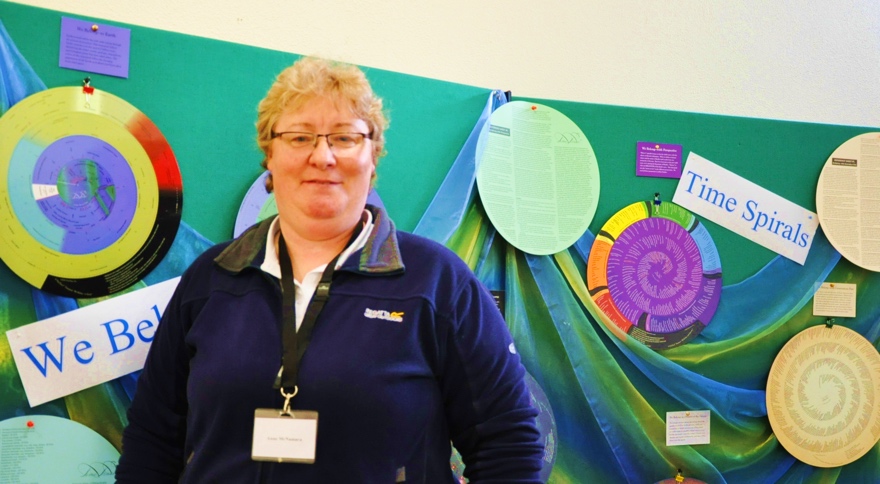 Friday May 4th, 2018 began with Eucharist in the Edmund Rice Chapel. We expressed our prayer in symbol, word and song. We had before us the symbols from South West (Ireland) and Newfoundland and Labrador Provinces. We reflected with South West (Ireland) on their symbol of framed minature football jerseys from Cork, Kerry and Limerick depicting play and joy and recalled God “as by our side, creating“. We reflected with Newfoundland and Labrador on their identity as a fishing and coastal community, aware of the sea, and we hung their banner which read “Launch out into the Deep“. The gospel reminded us of the huge catch of fish and the subsequent homily spoke of the love expressed in what we do, how we offer that and how we are constantly reminded of the God who calls us to answer the needs of the people of the time.

We prayed with the symbol of bowls of water from Africa and watched as the sisters danced and sang to a meeting point and poured from their individual bowls carried on their heads, into a common bowl. They also passed around these bowls and each was blessed as we honored this African symbol. Their reflection spoke of the importance of the bowl in African life – both for storage and cooking.

We spend the rest of the afternoon working in our groups, following the Contemplative Dialogue model. This involved quiet time, sharing in small groups and plenary sessions. We worked with the document Discerning Anew and listened as we drew the threads together of the wisdom from the entire Congregation expressed in this document. Each group expressed their sharing through a symbol drawn on paper.

For some of the afternoon we looked and reflected on the practicalities of leadership – taking into account our locations, areas of growth in numbers and giftedness. We looked in groups at the proposals send in from the various Units and prepared these for taking to the general body of the Congregational Gathering next week.

Following this the North East (Ireland) Province shared their symbol of the rhizome and described life and ministry in their province. Their symbol was an example of a stem that grows horizontally near or just under the ground, is capable of producing both a root system and new shoots and shares the available food supply with neighbouring plants. We heard about the different developments in their province in the light of changing needs and courageous new initiatives. The final part of their presentation was a blessing for the group, shown through pictures and song.

We are looking forward to the input from Fr. Diarmuid O´Murchu tomorrow as he helps us understand Religious Life in the 21st Century.