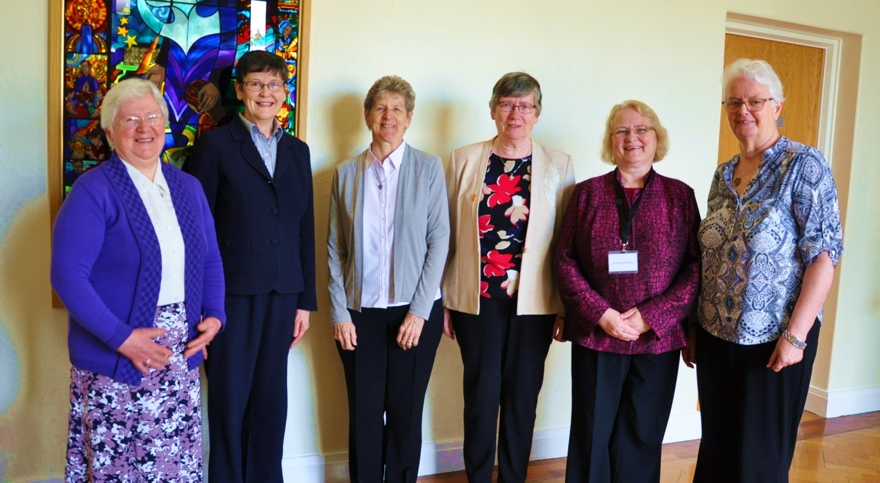 “Three minutes to go” … Sr. Goretti O’Callaghan of North Presentation Convent called us to readiness. At North Cathedral the sense of occasion was rising as we arrived to a maelstrom of welcome greetings, familiar and new faces, and final preparations for what was to be the highlight of this day of this week in the city and county of Cork, – our ‘homeplace’ as Presentation people.

“Céad Míle Fáilte … a hundred thousand welcomes to the ‘real capital of Ireland’, as you converge from your sixteen countries around the world.” Goretti reminded us, Delegates to the Congregational Gathering 2018, of the real reason we are here this week: it is all because of one woman, Nano Nagle, and because in our world “people still suffer and cry out for justice”. Nano, woman of vision and faith in God who calls, gave us the programme for responding to this world, in a word: Love.

Students and teachers from St. Mary’s Girls’ Secondary School, Midleton, North Presentation Secondary School, Farranree, Scoil Aiseirí Chríost, Farranree, North Presentation Primary School, Gerald Griffin Street, St. Brendan’s Girls’ Primary School, The Glen, then took over. With care and devotion, they portrayed in film, music and movement the key themes of Nano’s life and service: the gifts of education, equality and fairness, the paths to peace on earth. Students from Midleton presented their magnificent work of art which would head our twilight walk: a carriage-size lantern evoking the contrasting phases of Nano’s life and the contrasting faces of life for rich and poor who are always with us.

In her words of appreciation on behalf of everyone who was privileged to be there, Sr. Mary Deane, our Nottingham-born Congregational Leader, captured the wonder of the moment (having been tutored in her pronunciation of ‘Scoil Aiseirí Chríost’ in Gaelic!): who could not be drawn by the power of the love which can work the transformations our world needs? All are called to receive light, to share light, to be light, and to delight in the gift of God.

We Delegates were then presented with our lighted lanterns and we were off. Leaving North Cathedral we walked the route taken by Nano on her daily homeward (downhill!) journey. For this we were guided by Sr. Emer Madigan in her own inimitable, informed and reflective style. We were deeply attentive at the locations of Nano’s three schools and first convent on the north side of the city, the school at ‘Cross Street’ in the middle parish, the sites of prisons befriended by Nano at both North and South Gates, and the signposts to narrow lanes, none unknown to our ‘Lady of the Lantern’. We evoked some bewilderment and a few questions from members of an unsuspecting public as we ‘reclaimed the streets of Cork’ (Emer’s words).

At Nano Nagle Bridge across the south channel of the Lee (the only bridge in Cork to be named after a woman), to the beat of the Barrack Street Band, Sr. Mary O’Brien offered her own composition, “Salute to Nano!” This original piece will be widely published, as will photos, footage and fuller accounts of this unique occasion.

In “South Chapel” we rested and mused on the history, the wisdom and the charism of Nano and her fledgling community. In this we were once again beautifully aided by offerings of music and movement from Christ the King Girls’ School, South Douglas Road and Bunscoil Chríost Rí, Turner’s Cross.

And so to Nano Nagle Place at “South Pres”. Here the students and teachers of Scoil Maria Assumpta and Presentation Secondary School, both of Ballyphehane, awaited us. They brought to a wonderful conclusion this celebration which had unfolded in multi-coloured, multi-cultural, multi-layered, joyful and reflective manner. The entire event depicted life’s pathos and potential, and one woman’s brave and fruitful response.

Submitted by Delegates of the North East Province, Ireland